To share your memory on the wall of Randall \"Andy\" Cordle, sign in using one of the following options:

Receive notifications about information and event scheduling for Randall "Andy"

We encourage you to share your most beloved memories of Randall "Andy" here, so that the family and other loved ones can always see it. You can upload cherished photographs, or share your favorite stories, and can even comment on those shared by others.

Posted May 18, 2021 at 11:57am
I am saddened to hear of Andy’s passing. Andy was a kind gentleman and a pleasure to work with. The entire family is in my prayers. Sarah Burke
Comment Share
Share via:
DS

Posted May 17, 2021 at 04:01pm
Traci I'm so sorry to hear about your loss Andy was a wonderful friend to me and Rick we loved talking to him we would always joke and have a good time and we will miss him dearly but one-day we will get to see him again in heaven and it will be worth it after all God bless you always and Jenson to you all will be in our prayers Jesus loves you all
Comment Share
Share via:
JM

Posted May 17, 2021 at 02:34pm
Tracie, I know there seems to be no words to help. I am so sorry to hear this news. Prayers are coming your way. Jeanne
Comment Share
Share via:
AM

Posted May 17, 2021 at 10:36am
A true gentleman in every sense of the word. I am grateful for the privilege of knowing Andy and to have considered him a friend. He made this world a better place through his life and his example for others to follow. He will truly be missed.
Andy Mullins

Posted May 15, 2021 at 05:53pm
Sending prayers for the family and friends. Andy was always so nice to work with very respectful and kind. 🙏🏻🙏🏻
Comment Share
Share via: 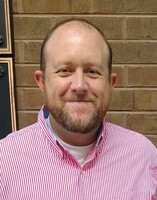